Skip to main content
Home /Blogs /John Tierney's blog /Where to look for burials in the Tuam Union Workhouse?

Where to look for burials in the Tuam Union Workhouse? 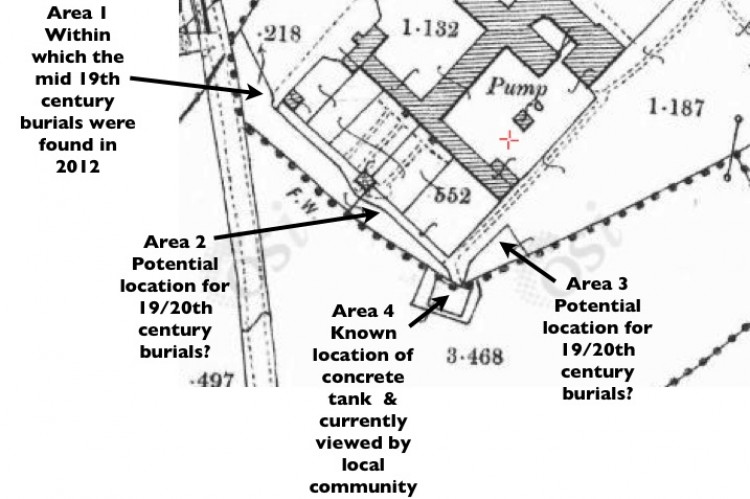 4 areas to be considered in testing for human burials

There could be human burials anywhere within the site of the Tuam Union Workhouse -  especially dating to the mid-nineteenth century before the formal burial ground was established in the nearby townland of Carrowpeter. Delaney (2012) refers to information in Claffey (2009) that the Poor Law Commissioners were unhappy with the Workhouse burial ground being located within 90 feet of the fever sheds and the formal burial ground subsequently being established in Carrowpeter.

The current community-led research in Tuam has identified one surviving area (Area 4 in the figure above)  of the Workhouse as being the location of the concrete tank in which skeletal remains and human skulls were seen in the 1970s. As a result this square patch of ground has been the focus of attention for the last week. The concrete tank has been variously refered to as a septic tank or a water tank. Curiously Area 4 appears to be in a different townland to the Workhouse proper.

Looking at the site with a field archaeolgist's eye I'd suggest we can identify 4 areas which have a high potential for containing human burials from the 19th or 20th centuries.

Area 1 is shown on the early 20th century 25 inch map and it was within this area that the human burials were excavated in 2012. This area was built over in the 1970s although the 48 burials excavated in 2012 were not overly disturbed by those construction works.

Areas 2, 3, and 4 appear not to have been built on in the 1970s  and it is hypothesized that they may contain burials. To test this hypothesis the usual method is to start with a geophysical survey followed by targeted test excavations. It is a simple procedure and there are archaeologists in Galway perfectly capable of doing the testing. It takes about a month to get the necessary licences from the relevant state authorities. Make that a month to scope and cost the project, a month to get the licenses, two weeks to do the testing and another two weeks to report. Three months to have facts to add to, and test, the considerable research done by Catherine Corless.

I'd also suggest that to answer the full range of questions about the burial practices associated with the Workhouse, and maybe even St. Mary's Mother & Baby Home, that the local community should also research the Carrowpeter burial ground. If we are all going to deal with the issues of 20th century institutional burial practices then we need to be methodical, rigorous and use established good practice.