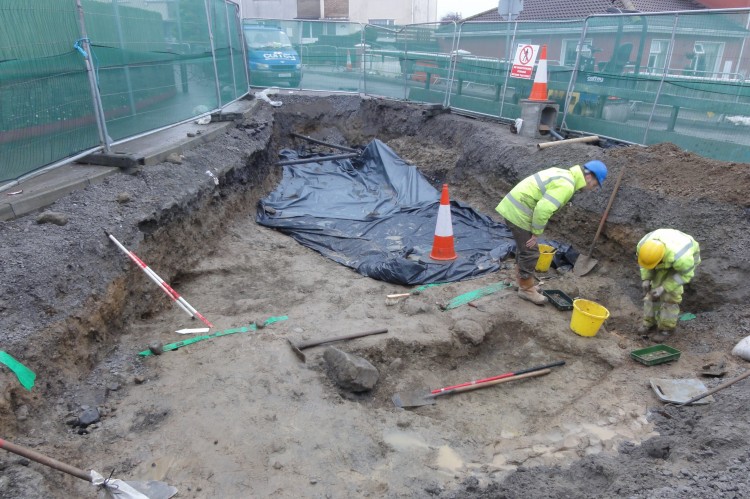 Eachtra are currently in the process of excavating a number of human remains in Toberjarlath townland on the eastern edges of Tuam, in Co. Galway. Remains were first discovered in a trench excavated by Coffey Group in order to insert a new watermain as part of the ongoing works associated with the Tuam Town Water Supply Scheme. The trench was located in the middle of the road at the junction between the Athenry Road and the Dublin Road Housing Estate.

Following consultation between Eachtra and The Department of Arts, Heritage and the Gaeltacht a mitigation strategy was agreed with both Coffey’s and Galway County Council who are supervising the Scheme. It was agreed that a small area measuring 5 m x 6 m across the area of disturbance for two proposed pipeline trenches would be excavated and any human remains would be fully recorded and removed.
The remains of eleven individuals have been excavated to date. They have all been contained within discrete grave cuts and evidence for the use of coffins is attested to by coffin nails found alongside the burials. They are also all consistently orientated north/south – with the head to the north. In three cases two burials have been contained within the same grave cut but apparently placed in separate coffins.

The Dublin Road Housing estate on the eastern side of the Atherny Road was built in the 1970s partly on the site of the old Tuam Workhouse which was demolished in 1969. Upstanding remains of the north-western and south-eastern boundary wall of the Workhouse are visible to the north and south of the excavation area. The sub-surface remains of the short western section of boundary wall were identified just to the west of a modern watermain which forms the western boundary of the excavation area. The burials then were located just inside the boundary walls of the old Workhouse which is marked on the 1905 edition of the Ordnance Survey Maps of the area.
We have kept in close in contact with Tony Claffey, the author of the Tuam edition of the Irish Historic Town Atlas (a fabulous series published the Royal Irish Academy), throughout our monitoring and excavation works on the Tuam Town Water Supply Scheme. Tony kindly offered some historical detail about the Workhouse and unearthed an intriguing nugget from a report written by Maurice Laheen on the History of Ballymote burial ground under the auspices of FÁS in 2003-2004. The Workhouse was built in 1841 and opened in 1846 with accommodation for 800 paupers. Tuam was very badly affected by famine in 1822 and again in the 1840s. Laheen records that the Tuam Herald reported in February 1848 that ‘at least 2,000 unfortunates were waiting in front of the Workhouse at Dublin Road on a Monday hoping to gain admission’.

Laheen also noted that the Poor Law Commissioners the body who supervised the Boards of Guardians of the Workhouses contacted the Tuam Board in 1847. They strongly disapproved when they discovered the existence of a burial ground within 90 feet of the fever sheds at the Workhouse in Tuam. The Commissioners felt that a burial plot should be located outside the boundary walls. Following this intervention tenders for a burial plot were printed in the local press in February 1848. A plot was found further east along the Upper Dublin Road in Carrowpeter townland in a field known locally as Dr Clarke’s field. A memorial was unveiled at the site of this burial ground in 1947 on the centenary of the great famine. A second famine burial ground was located along the Ballymote road to the north of Tuam. The local residents association erected a plaque in 2005 to the memory of those buried there. The extent of the devastation wreaked by the famine in Tuam can be gleaned by reference to an account in the Tuam Herald in 1852 in which the graveyard surrounding Temple Jarlath in the centre of the town was said to be ‘overcrowded with famine dead’. Two auxiliary workhouses were also opened in High Street and in Liam Mellows Street south.

It is possible that the burials uncovered and excavated last week and this week formed part of the burial ground within the Workhouse boundary wall which so displeased the Poor Law Commissioners. The north/south orientation of the burials is unusual as an east/west orientation is more usual in a Christian context. It appears however that the favoured orientation breaks down in times of stress such as during a famine and burials are more likely to have respected features such as the western boundary wall of the workhouse (information from @irishacw on twitter).
Excavation work will continue this week and it is projected that all of the burials within the small excavation area will have been removed for analysis by next week. The excavations are currently being undertaken by a small four person team of dedicated, experienced archaeologists (David O’Reilly, Ann Bingham, Brendan Kelly and Ray O’Riordain). The team is following established best practice guidelines for the excavation of human remains and are also striving to afford a certain dignity to the remains of those likely to have perished during a time of great hardship.
Blog category:
Miscellanea