The Mystery of the Painted Stone 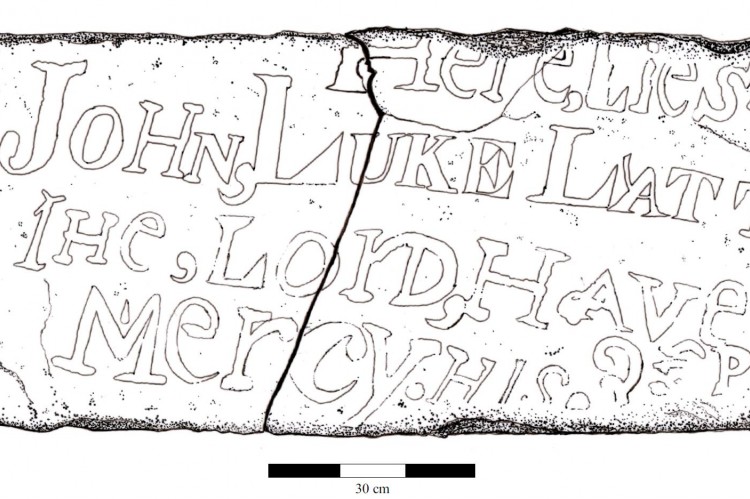 Work is presently ongoing in Tuam on a new road which links Shop Street and Bishops Street and runs along the banks of the River Nanny. Prior to construction of the road we got the chance to excavate the subsurface remains of what is known as Garvey’s Mill. The site of a mill is well documented on a number of old maps of the town dating back to Morris’s map which was drawn in 1720. Nial O’Neil led the excavations and revealed three main phases of development on the site with the final phase corresponding to the outline of the buildings on the 1838 Ordnance Survey map of the town and Bourke’s 1863 map.

The excavations revealed that the later mill wheel would have been set into a beautifully constructed wheel pit which was built with cut and dressed limestone slabs. Interestingly the underside of one of the base slabs of the wheel pit was written on in red paint. During the excavation an attempt was made to decipher the lettering and the writing was read as ‘Here lies John Luke L’Atty the lord have mercy on his soul’ with L’Latty interpreted as late of Attymon.

During the post excavation analysis of the excavation results we asked David O’Reilly who also worked on the excavations to draw up some of the lovely cut stone from the site which included a number of portions of mill stone, portions of a possible sluice gate mechanism and the painted limestone slab. As is often the case when drawing something to scale the intense scrutiny which this requires can sometimes lead to further observations and theories about the object being drawn. This is what happened to David as he examined the painted stone and he has proposed an alternative interpretation of the writing.
David believes ‘that the vertical stroke between the L and the A might be a serif or flourish on the bar crossing the A, as all of the other capital letters are nicely formed and have pronounced serifs on them'. It also looked to him 'that the lettering was done by two different hands, the first person wrote his name; ‘JOHN, LUKE LATTI’, which were all in capitals, with all of the letters being well formed and having straight lines and fairly even proportions. The rest of the writing is added around this name in a messy mixture of capitals and lower case letters of different sizes either as an afterthought or as a prank and styled to look like a gravestone inscription.’
The painted writing on the stone can be read as follows;

Here, LIes-,
JOHN, LUKE LATTI
tHe, LOrD, HAVe
Mercy. HIS & his Pos
David also believes that the writing may have been intended as ‘Here lies John Luke Latti the Lord have mercy on him & his posterity’ which would be a fairly common formula for a memorial inscription. However David thinks 'they made a mess of it and wrote ‘tHe, LOrD, HAVe MerCy, HIS & his Pos’ the second ‘his’ is turned sideways and squeezed between ‘&’ and ‘pos’ and is almost impossible to see, and ‘pos’ has lost most of the ‘s’ from the end.’
David goes on to postulate that John Luke Latti may have been the stone mason who worked on the cut dressed limestone for the new mill building and the central painted lettering may have been him signing his work. Somebody else then decided to contrive a memorial stone inscription from the signature. Is this really a prank? It is unlikely that we will ever find out, however, as David suggests we will have to do a little more research on the name John Luke Latti.
Blog category:
Miscellanea