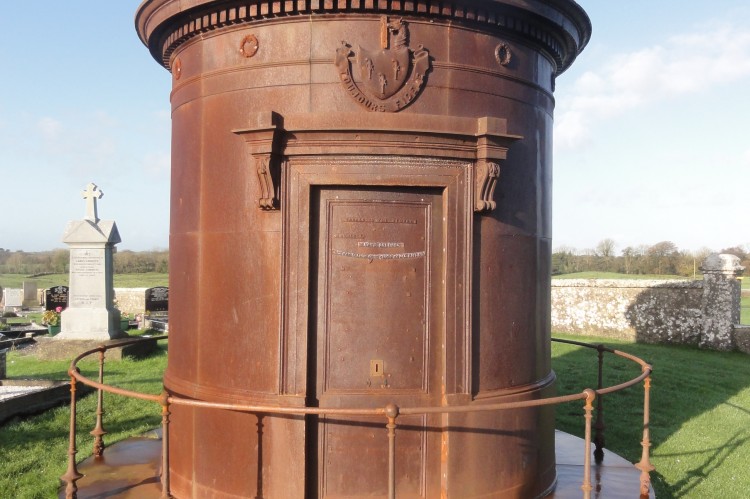 While in Charlie Byrnes Bookshop in Galway last Saturday I picked up a copy of Clonbern Graveyard Its Monuments and People, a book recently published by the Follies Trust. The publication marks the conservation of a rare and unusual cast iron mausoleum located in Clonbern graveyard in north Co. Galway. It is the final resting place of John and Maurice Dennis. The book is dedicated to Maurice Craig who died this year and was the author of Mausolea Hibernica among many other notable and scholarly architectural works.

Máirín Doddy the Galway County Council Architectural Conservation Officer has drawn together nine expertly researched and illustrated essays by nine separate authors which tease out various aspects of the amazing mausoleum, the graveyard, the families involved and the historical and personal landscape in which the monument and the graveyard are set. The book has been edited by Dr Evelym Mullally who also authors an essay on the Egan Mausoleum which is also found in Clonbern graveyard. The Follies Trust, Galway County Council, The Department of The Environment and Local Government and the Heritage Council have supported and facilitated the project, however, all pay tribute to the local community who have been and will continue to be the custodians of this remarkable graveyard.

Michael Craig begins by defining what a Mausoleum is and reminisces about his part in the production of what was to become Mausolea Hibernica. He also explores the possible motivations which drove the design and building of these strange and eccentric monuments to the dead.
Máirín Doddy explores Ireland’s rich heritage of historic ironwork and also examines the iconography of the Dennis mausoleum and draws some classical parallels and offers a range of possible influences such as the Choragic Monument of Lysicrates and the Breakwater Lighthouse in Portland Maine.
The extraordinary history of the Dennis/O’Rorke  family is revealed by Dr Nini Rogers and as with all family history it is a real window on the times through which the characters pass. It is also a story deeply rooted in the County Galway and one in which the peculiar inter play of politics, religion and economics is carefully drawn. Strong women feature prominently throughout  and the mystery of the empty trestle table within the mausoleum which must surely have been intended for Elizabeth the wife of Colonel Maurice Griffin Dennis is examined. Other intriguing questions are also posed.

Primrose Wilson examines the history of the two houses most closely connected with the Dennis family; Bermingham House and Clonbern Park. Berminham House was first leased by John Irwin Dennis in 1838 and bought by him in 1851. The current owner is a direct descendant. Clonbern Park the site of which overlooks Clonbern graveyard and the Dennis Mausoleum was built around 1850 by Charles Denis O’Rorke. The house burnt down during the 1920’s and was fully demolished in the 1960's.
A portrait of John Dennis by the artist Henry Graves which hangs in Bermingham House has an astounding back story which is described by Susie and George Gossip. Lord Crofton from Mote Park in Roscommon and other friends had commissioned the work to commemorate John Dennis’s long service as Master of the Galway Blazers. It appears that Henry Graves painted and composed the portrait from a photograph in a studio cum dark room at Mote Park built for Lord Crofton’s daughter Augusta. Augusta had developed an interest in photography, a craft which was only developing during the 1860's. As Susie and George Gossip declare ‘the Dennis portrait must be one of the first documented instances of the use of photography in portraiture’.
Paul Walsh traces the history of the Stephens Iron foundry in Galway and persuasively argues on the basis of the quality range and scale of the work produced  that the Dennis mausoleum  instead of being a Scottish import may well have been manufactured there. He also suggests that the shape and design of the mausoleum may well be modeled on a diving bell used in the repair of Galway dock gate in 1844.

The conservation consultant on the project, Brian Nolan, describes the condition of the mausoleum and outlines all of the measures taken to restore and conserve the mausoleum. He also discusses the rationale behind the conservation decisions which were  taken.
The history of the ruined church and graveyard at Clonbern is pieced together by Dr Christy Cunniffe from scraps of historical evidence combined with a detailed examination of the remaining archaeological evidence. A story is elegantly drawn of a medieval parish church which flourished for at least four centuries.
The breadth of discussion and the information to be gleaned from the separate but related essays is wonderful. The book is illustrated with great photographs throughout. Line drawings of the Dennis mausoleum by local school children enhance the scholarly text. As a field archaeologist I would have loved to have seen a few more maps and in particular a location map as anyone who reads the book would be immediately drawn to visit this amazing monument and graveyard. The book stands as great testament to a wonderful monument, to the people commemorated and to the place in which it is located.
Blog category:
Miscellanea