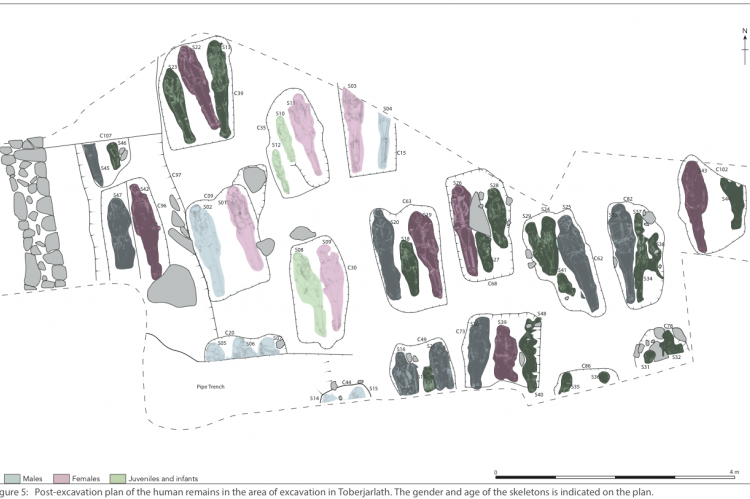 This post is written in the interests of taking a measured archaeological approach to the current debate about the Mother & Baby Home in Tuam. Two key issues underlie the whole matter from an archaeological perspective;

1. the lack of a clearly identified burial ground in the Tuam Union Workhouse.

Ninetheenth century Union Workhouses had their own burial grounds - death and burial was just as much a part of life in a Workhouse as it was outside. The burial practices of the Workhouse & of the Mother & Baby Home in Tuam continued for over 110 years - how did they differ and change over time?

Our interest in the Tuam case stems from

1. A keen interest in the value of local history and the work of local historians such as Catherine Corless whose research and desire to commemorate the people buried on the Workhouse site brought the whole issue into the public eye.

2. Our company were involved in a small excavation on part of the Tuam Union Workhouse site as part of a monitoring scheme in 2012.

In order to see Tuam Workhouse in a broader context I have had a quick look through the historic maps for a number of other Workhouses which I have visited over the last few years. There are seven sites presented here but as there were between 130 and 163 Unions in 19th century Ireland this subsample needs to be increased.

Tuam is the only Workhouse of the seven sites I have listed without a clearly identified burial ground on the early 20th century 25 inch maps which are accessible at www.osi.ie (the links to each site are shown below). This raises the possibility that there was no burial ground for the Tuam Workhouse. However, given the results of the 2012 excavations in a corner of the site it is more probable that the burial ground was not fully annotated in the OS map. When my colleagues published their report on the Tuam excavations they were grappling with the difficulties in identifying a formal burial ground. Now, I think we’d be happy to say that the southwestern section of the Workhouse was the original mid-19th century burial ground. My colleagues blog post (Delaney 2014 -http://historicgraves.com/blog/miscellanea/probable-workhouse-famine-burials-tuam) about the excavation works within the Workhouse grounds also quoted research by Maurice Laheen in 2003-4 listing a burial ground for Tuam Union Workhouse going to tender and being provided in Carrowpeter (quarter of a mile east of the Workhouse). Again this burial ground is not shown on the 25 inch OS map but its location was marked by acommemoration in 1947 and that commemoration stone is shown in the 2012 blog post. How many Workhouse inmates were buried here after it was opened? Could Mother & Baby Home burials have taken place in Carrowpeter also? (Note - this to my mind is a crucial point in the whole issue - Carrowpeter was the formal burial ground for the Workhouse after 1847/48 - when did it go out of use?)

Tuam Workhouse has no burial ground marked in the 25 inch OS map. There are four separate sections of the Workhouse grounds, to the rear of the main buildings, which could have served as a burial ground.  The larger section has been built over but the other three sections have not been built on (although they may have undergone some ground disturbance since the demolition of the Workhouse & Home). Our excavations in 2012 found the skeletal remains of 48 bodies in 18 grave pits - buried with coffins in tidy rows. So even though these people died at the time of the famine and were in all likelihood inmates of the Workhouse these were not hurried, careless burials. A formal burial is evident. The 2012 rescue excavations stopped at the limit of the 2012 groundworks so the full site was not stripped and excavated.

Burial ground shown unattached and located due west of the Workhouse - marked as ‘Union Burial Ground’.

A burial ground is shown in the southwest corner of the Workhouse Grounds.

The history of burials in Tuam Workhouse is complex. The Union Workhouse was a highly organised space and while many workhouses had on-site burial grounds it is not unusual for burial to have taken place off-site, in adjacent, specially commissioned burial grounds. It is also possible that burials may have occasionally taken place outside the allotted burial grounds but still within the Workhouse grounds (Sutton 2004).

The topic of burial practices related to infant deaths is highly emotive and needs to be handled carefully. Every family has some story of stillborn or infant burials and the often upsetting elements involved of secrecy, confusion over consecrated ground and late night burials. The issues raised about burial in the Mother & Baby Home need to be answered in a careful measured manner  - they reflect much about early 20th century Ireland which we need to face up to and shine a light on - how else will we improve if we ignore the lessons of history?

We would hypothesise that not only did the Bons Secours nuns in Tuam have to face the difficulties in burying dead infants but so too did many/most Irish families at a time when infant mortality rates were very high. It is no coincidence that Children’s Burial Grounds abound throughout Ireland and also that one is found in Ballymoat townland less than a mile northeast of the Workhouse. If the nuns did bury the infant dead within the Home grounds then where did the neighbouring families bury their infant dead? Some in the children’s burial ground and some in consecrated ground?

Those were hard times and these, for many families, are better times. Let’s not forget that and deal with these issues in an open and clear manner. We must be explicitly  evidence-based in our history and test hypotheses before coming to conclusions.

For those wishing to see if there are undisturbed burials in the remaining Workhouse areas a programme of geophysical survey followed by targeted test excavations can be undertaken. This would help establish the facts of the matter and make the discussion evidence-based.

Any conjecture without testing the hypothesis is just that - conjecture. Geophysical testing is unlikely to answer the key questions on their own but they might suffice if a key aim is not to disturb any ground at all. Targeted excavations would allow geophysical anomalies which might represent burials to be tested. They would not have to involve the disturbance of the buried human skeletal remains - simply establish their presence/absence.

The hypotheses to test are;

1. Are there further 19th century burials on the Workhouse site and what is the extent of the burial ground?

2. Where are the underground tanks in the surviving areas of the Workhouse and what was their primary and secondary function?

3. What burial practices are represented within the Workhouse grounds?

4. An investigation of Carrowpeter burial ground would also be warranted for a complete review of the matter.

5. On a wider scale then, the burial practices could be compared with non-Workhouse burial grounds.

I suspect there will be very little appetite to disturb any of the burials in the Workhouse or Carrowpeter. An initial inclination to consider disinterrment and reburial of any babies buried in a concrete tank would have to be reconsidered when one takes into the account the likely condition of any skeletal remains still surviving today.

In conclusion, it is heartening that this vital debate is being held thanks to a local historian, a community group and a number of journalists. Local history with a national impact!

Philip Boucher-Hayes’ journalistic covering of Catherine Corless’ work with various links to live news broadcasts and copies of some of Ms Corless’ documents.

Catherine Corless’ synopsis of her research

The Mother & Baby Home Research Project on Facebook. An excellent example of research and activism.

Fundraising website for the community group in Tuam who wish to commemorate those buried on the site.